Mount Washington, located in central Vancouver Island, west of Courtenay. Imagine a place where everyone is smiling, the sun is shining, the snow is sparkling and you don’t have a care in the world, all you can think of is the rush of gliding down a mountainside. 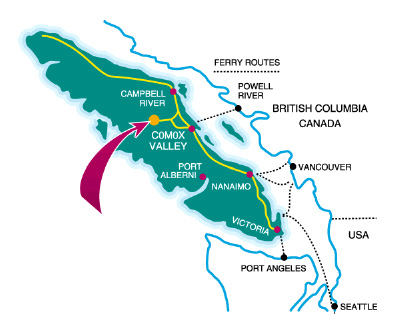 Warning! Visits to the Snow Zone can be addictive. Watch for signs of a rosy complexion, a steady smile and a general feeling of well being. Don’t be unduly alarmed – this is normal on Mt. Washington!

The snow here is often deeper than anywhere else in British Columbia, and occasionally deeper than anywhere else in the world! That was Mt. Washington’s claim to fame in late 2011. Try as they might, no matter where the staff called, no one could beat the 21 feet of snowpack that kept falling and falling. Mt. Washington has long been known for having good snow conditions from early in winter to well past Easter, despite the fact that the top of the mountain isn’t as high as the peaks of Blackcomb or Whistler Mountains. In 2011, Mount Washington had more snow than any other ski resort in the world.

Along with an abundance of snow, the hill is blessed with mild temperatures, an average of -2C. The Comox Valley is so mild in general that you can ski in a light jacked all morning, then drive down to sea level and mountain bike, sail or golf all afternoon. At Mt. Washington, you can do all the basics, its high speed quad whisks skiers to the summit in six minutes (supplemented by a fixed-grip quad, a six pack, a triple, and three magic carpets) to varying starting points for its 70+ alpine runs. The runs follow a nice, consistent fall line from the summit, down through gladed bowls and wide trails, through the trees, then leveling off into open runs nearer the bottom.

By far the majority of BC visitors come from Vancouver Island, primarily from the Victoria area, a three-hour drive south of Courtenay. Visitors from the Lower Mainland account for about 10 percent of the total. Visitors can arrange to stay in either the on-hill accommodations or in the nearby Comox Valley. It doesn’t take long to discover why this part of the province continues to attract new arrivals from across the country. With a temperate coastal climate, it’s possible to ride bicycles on local trails year-round, yet be up in the snowfields with a half-hour drive.

And what a drive. The steep, winding Mount Washington Road leads 19 miles (31 km) west from Hwy 19 in Courtenay to Mount Washington. Not that other winter play places don’t also have such roads. Most of them just don’t have the snowfall in such quantities. If you’re not into driving, shuttle buses to the mountain run from a number of hotels in Courtenay.